Autism and Music therapy – “first you imitate then you innovate”.

“First you imitate, then you innovate” (Miles Davis)

Miles Davis illustrates a key tool or skill that we all possess and can use in building a musical dialogue with another. A tool that can be particularly effective in establishing a connection with autistic clients.

Although himself a legendary jazz improviser, Mr. Davis alludes to something fundamental to us all, a cornerstone of Human Communicative Musicality and something we do as little people. It is, in fact, a skill evident from birth.

Imitation is not just copying or mirroring.

The act of imitation says so much more. It says

‘Hey I’m here too, and I can appreciate you, and what you are doing’.

This is amazing: to feel recognized, to appreciate that another person gets you! This can be achieved without language or the need for direct face to face contact. Making it ideal for use with individuals with autism.

For infants imitation is immediate and direct, one hand copies another hand, or voice emulates voice but it can also cross modalities. For example, consider a curving gesture with the hand following the changing pitch in a mother’s voice. It doesn’t stop there. Newborn babies, after establishing imitation, move on to the next step (yes you guessed it) to elaborate or augment – to innovate. 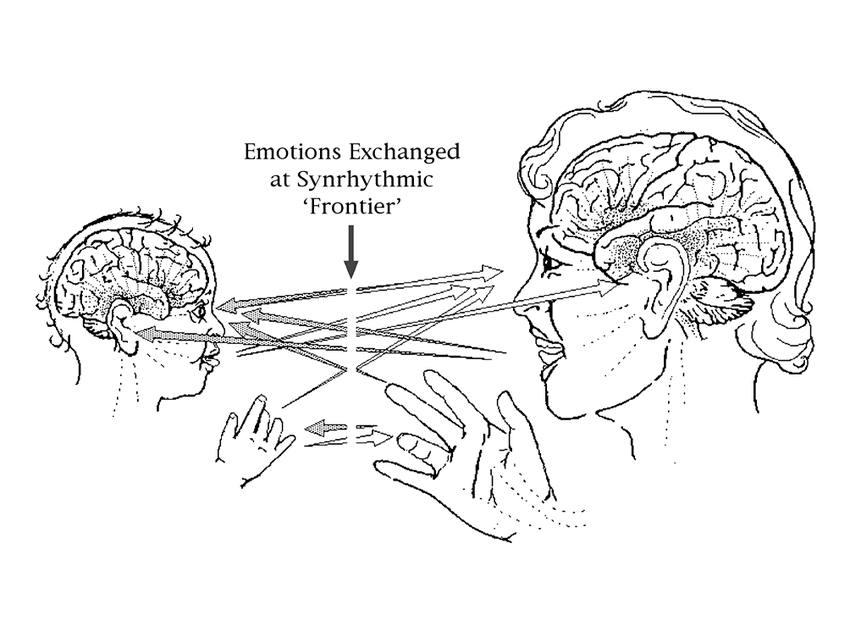 Musically this is a very simple framework and anyone can do it. It is especially useful when dealing with non-verbal clients. The progression to elaboration can also be used to intervene in cycles of repeated behavior. That said, a key difference between the infant-parent dyad and the musical play dyad is the focus on modality. In infancy, these proto conversations are a dance between voice, body, eye, and ear (as depicted above). These interactions are often face-to-face. A seamless improvised dance of the senses that moves fluidly from one modality to another.

When employing imitation in improvised musical play or therapy it is good to focus on one clear modality, sound. In autism constraining the modality helps all parties control the interaction and their arousal level derived from it. By using a physical instrument, an object separate to both parties, this can provide a tangible and physical hub for the interaction.

“I make sound with this object. The sound is out there and exists. You can make a sound with that object too. That is your sound. I can choose to interact with it or not”.

Limiting the palette of sounds available and the acoustic context (environmental sounds) can be crucial as well. And this rather pragmatically feeds into the aspect of focus introduced above.

Testing it out with Skoog

In many of the early research trials of Skoog, we simply spent time with just a Skoog and a young person in a quiet room, just to see. They did not know me and I did not know them. We would perhaps sit quietly side by side until one of us bumps the Skoog making a simple tone, and once one of us puts something out there. The possibility of an exchange built on imitation presented itself.

As a therapist or musical collaborator, by engaging in imitation we start to create the basis for a narrative, an exchange. The key is to imitate but to leave space. To make sure there is room for both of you. Once you have established imitation you can move very quickly to add or augment. No doubt your partner in crime will beat you to this and keep you on your toes, and that is when the fun begins.

These can be the building blocks for negotiating a dialogue, a co-improvisation, an exchange. It can be momentary or in-depth and prolonged but what is key is that it is done with honesty and sincerity. The reason for leaning heavily on imitation in infancy is to point out that this is a core element of human psychobiology. Something that we can tap into even when there are barriers, be they emotional, cognitive, physical or as is usually the case a combination of all three.

Finally, if we go back to the layman’s view of music therapy introduced in an earlier blog post. Imitation is the topic of conversation that allows us to share time constructively. It does not need to be musically complex or avant-garde it can just be a framework or scaffolding that lets us be together.

First, we imitate, and then we innovate, and that my friends, is jazz…

Next up, we will explore some examples of how we can use Skoog more specifically. To engage in improvised musical play, examine how we can utilize the voice and some ideas on ‘sounds of special interest’; often referred to in routines, repetitive behaviors, and obsessions. We go into more detail about this topic in the webinar, HOW TO SUPPORT COMMUNICATION, CREATIVITY AND PLAY USING MUSIC AND ASSISTIVE TECHNOLOGY? Enter your details below to receive the free webinar direct to your inbox.

In the meantime, some wise words from a wise man. This quote from Colwyn says it all in a concise and academically meaty installment:

“Imitations by newborn infants offer surprising and rich evidence. Those human gestural expressions can immediately seek engagement with contingent responses of a sympathetic other. That they actively try to reciprocate in an intermodal matching of motives, taking the initiative to learn new marked forms or ‘conventions’ of movement by matching the body part, timing and expressive quality of the other’s gestures.”

For more on imitation see: