Autism, Special education, and Skoog – in Venezuela – Guest Blog by psychologist and musician.

My name is Sadie Gibbons. I am a psychology graduate currently living in Venezuela. I first heard about the Skoog through an article in the BPS Magazine, The Psychologist.

Having made some connections in the education system through teaching English, and having some experience working with special needs children in a music school. I realised that the Skoog had a lot to offer the children in Margarita Island,  Venezuela.

On a visit to the UK I did some fundraising and managed to take back with me a Skoog and laptop to start work. 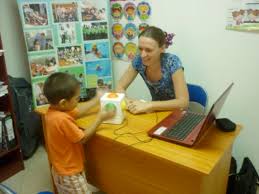 How did people respond?

The Skoog’s appearance has an intriguing appeal.  Many children call it a ‘magic box’ and immediately want to touch and explore it.  Everyone who met the Skoog had a positive response to it and enjoyed making music on it.

In Venezuela there is still a lot of stigmatisation of those with learning disabilities which leads to many children not being given the attention they need to grow and develop.

The foundation where I worked with the Skoog provided much needed access to psychological, social and physiological assessments and therapies.

It was amazing to see how the Skoog had uses in so many areas; from complimenting psychological assessments, to music therapy, physiotherapy and even speech therapy. Because of its many functions I could work with professionals from every discipline at the foundation and with children and adults with all kinds of differing abilities and difficulties.

It was very encouraging to see the positive responses from parents of Skoog-users who often came to the foundation not expecting anything from their children. They witnessed first-hand them performing well-known classical tunes by the end of their first session!

The Skoog helped parents to see that even though their children were not getting on well in main-stream education they were well able to learn a new skill. And even excel in it, displaying abilities such as attention, perseverance, memory, coordination and creative expression.

An unexpected use for the Skoog

I had been working with many children with autism and down-syndrome who had got a lot out of the Skoog. Learning songs, composing their own music and even learning how to use the software.

However, it was when I started working with a little boy with very limited speech that I discovered another facet of the Skoog.  He had been referred to me because his speech therapist thought it would be a good creative outlet to counter his frustrations with communication, which indeed it was.

He learned quickly and it was clearly a great joy to play.  I noticed that he would often vocalize and mimic the Skoog as he played. So we had a go recording his voice and playing it back through the Skoog.  He was so intrigued with this and wanted to put into the Skoog the words he knew.

Words that were a great effort to say were then available at his figure tips to manipulate and explore. It became a great motivation in his speech therapy session. To have a go at “putting the words into the Skoog” and improving on his last week’s attempts.

The future of the Skoog in Venezuela

I have returned to the UK but my Skoog has a new owner in Venezuela. I found a family who have a daughter recently diagnosed with autism. The family has been working with other parents raising awareness of autism in Venezuela. They are looking to improve services to children with special needs. The mother is bilingual and has experience working in musical education for special needs children. She is very excited about the potential  for the Skoog in Margarita. At the moment she is working with her own daughter learning the software and has plans to start working with the Skoog on various projects. Including continuing work at the foundation.

The child Psychologist with whom I worked had been seeing the daughter and is also keen to encourage the family in the continued use of the Skoog.  The hope is that as interest and support increases we can get more Skoogs to Venezuela!

For more interesting stories and articles from Skoogmusic, subscribe to our blog: