Mike Scott is freelance musician and music educator. Mike’s work with Skoog has given many children and young adults  access to creating music. In this post Mike talks about his work with Skoog at Saltersgate School.

“Having spent the majority of last year working with students from Saltersgate School in Dalkeith, using a combination of the Skoogs wirelessly with iPads and connected to a MacBook Pro, I have witnessed an enormous difference with their attitude towards music and how they interact with it.  The School provides support for children and young people with additional support needs.

At the start, the students seemed a little unsure of the Skoog and its uses but with time and a series of lesson plans, we were able to get everyone using the Skoog to either create their own music or perform along with their favourite songs.

The students at Saltersgate come from a wide plethora of backgrounds and each have their own unique challenges to overcome when learning a musical instrument. These include both physical and learning disabilities.  Many students expressed the desire to learn a musical instrument but had also shown a lot of reluctance to take part as they found it challenging to interact with more conventional instruments whether due to a difficulty with dexterity, or with concentration.

After spending some time getting to know the students, and what they wished to gain from their experience, I found that they were unsure themselves what Skoog was and were approaching it more as a form of “work”, where they would follow a score, press the corresponding colours and look to move onto the next task.   What I wanted them to do was to connect with the Skoog as an instrument. To find their sound with Skoog.

I made it my goal to try and get my students to really connect with the Skoog as their instrument and to engage with the sounds they were creating and controlling when they touched the Skoog.

Most of my lesson plans were to help the students understand that within the Skoog was the opportunity to recreate almost any sound they wished. One of the ways I did this was with one class we would all choose our favorite instrument from the selection the classroom had and I would ask them to play something on it. Whether it was just a blow into a whistle, or bang a drum. I would then record the sounds they made into the Skoog and map a different sound to each button. We did this using the OS X software for Skoog. 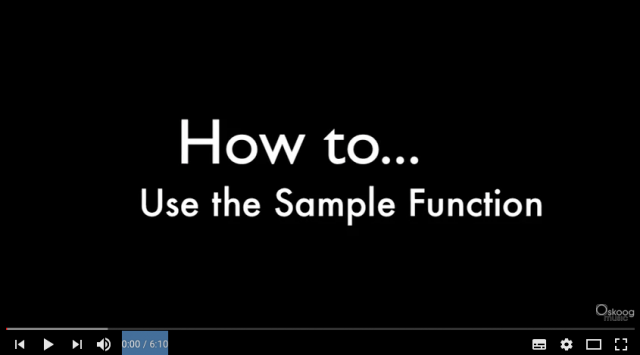 This along with a range of other lessons and activities have allowed the students at Saltersgate to connect with the Skoog and build their confidence enough to not only perform on their own music, play along with favourite songs on their favourite instruments but some students have also formed a band with the Skoog and performed Deep Purple’s “Smoke on the Water” at the end of year concert.

I would highly recommend schools, and other education centres, look to integrate using Skoogs within their curriculum. The success I have witnessed first-hand with the students I have been in contact with has been overwhelming. I am very much looking forward to continuing my work with them and am eager to see where the music takes them next.”

You can access further support, including free lesson plans and resources for Skoog here: Skoog Support.